This December I had the privilege of reading Educated by Tara Westover. I’ll be honest, I didn’t quite know what I was getting myself into. Thinking it would be more about the education aspect of Tara’s life than her life growing up without it, I was shocked and in awe of her courage as the story unfolds. Her memoir tells of her life growing up without education and how she breaks away from her eccentric family, going to college and eventually getting a PhD.

When we read books we often picture ourselves in the shoes of the main character. I found myself identifying with her desire to believe everything her family said growing up and struggling to realize their beliefs didn’t have to define her. Education, and I would throw in travel as well, opens your eyes from what your small world is to what it could be. Wrestling with changing your beliefs as an adult is an internal struggle that is almost impossible to verbalize.

Two quotes in her book struck me. First:

“It’s strange how you give the people you love so much power over you.”
― Tara Westover, Educated

The people you love, the people you spend your time with, shape who you are. What do you do when you find yourself in an unexpected disagreement with a friend? How is it possible this family member can think so differently than me? Perhaps the hardest part of growing up is realizing that all the people you hold dear won’t always agree with you. People that you work with with and meet might not even LIKE you.

This can either be your greatest defeat, or greatest asset. The ability to love someone despite your differences is powerful. The same goes for yourself. You must still love and believe in yourself; you must be ok knowing that you might be different than the people you hold love.

Tara found that in her book. She found a way to respect her family without condoning their behavior. She has not cheated what she believes to be right, even though it meant losing people she thought would be there for her forever.

The second quote I loved was:

“We are all of us more complicated than the roles we are assigned in the stories other people tell”
― Tara Westover, Educated: A Memoir

The truth is, no one in this world can know you like you do. Family, friends, colleagues know us for different reasons. So what happens when you start to grow or change? I like this quote because Tara describes something many of us have felt. Growing up, learning, and molding into the humans we want to be might mean changing what you previously agreed on with friends.

Just because someone has assigned you as a specific role in their head does not mean you are obligated to fulfill that role for them. Ultimately you must be confident in what you know, strong in how you do it, and have faith that you are on the right path. For me, that’s learning to listen and wait for God’s direction. For you, that might mean simply believing in yourself and not what others tell you is true.

As we move into 2019 I’m encouraging myself and others to be the best authentic version of themselves. What’s the point of people pleasing if it means losing yourself in the process? You can do this!

I am getting really excited as I start learning the history of Paul and the Corinthians in preparation for the new She Reads Truth study. In this study about 1 & 2 Corinthians I’m curious to hear Paul talk about topics such as love, spiritual gifts, repentance and resurrection. It’s really interesting to me, as I read about common problems for the church of Corinth, how relevant they still are today. (I’m sure I’ll see even greater connections after the study). Arrogance and the desire to gain social notability is just as relevant now as it was then, even if the context has changed a little. We are surrounded by people that live to please themselves, that search to gain better jobs or more recognition, to get more money or more followers on social media. Can some of these things be great? Absolutely. But how easy it is to fall into that trap of desiring it for your own benefits and not for the advancement of the Word.

I’m so guilty of this.

As my Wine Women & the Word bible study starts for the summer I am excited for us rockstar women to have some real talk about love, redemption and our roles. We will strive to connect these principles to our every day lives. These aren’t just stories to read, they are guidelines on living. Are we going to read the letters and ignore the teachings? Or are we going to choose to really understand and apply what we know?

I’ve thought about what it would be like to totally disconnect from social media for a day, for a week, or a month. I like to understand and know what is going on, so for me social media would be the hardest thing to completely give up. I think a clean break from scrolling through feeds on Instagram, CNN or Pinterest would be so much more challenging than I like to admit. But I’m feeling tired. I’m feeling brought down by the world and the worldly expectations of others. We are here to build each other up, so why do so many of us feel weighed down?

As we start week 1 and 2 we will begin to learn what it means to boast in the Lord and to find our roles in the body of Christ. I may not be a member of Corinth’s church, but for any of us that believe and know about Jesus we are members of his church and are given a specific way to live wisely and lovingly. I’m excited to see what we learn and to share our journey along the way.

Read below for a history and background of 1 & 2 Corinthians. Having this base knowledge will create even more depth for the study. Allow yourself to read, connect and  learn.

The letters 1 & 2 Corinthians were written by Paul from the city of Ephesus in the Roman province of Asia. Paul wants the church in Corinth to work together to advance the gospel. He is writing to them because they have become divided by arrogance and pride, especially among those of the more powerful members.

Corinth connected the Greek mainland with the Peloponnesian peninsula. It was a high traffic area where many cultures and religions resided. Many gods found a home in Corinth and were integrated into governmental activities such as festivals, trade guilds, social clubs and every day life. Traveling spokespeople often stopped in Corinth to charge a fee as they advised people on how to advance socially. (Hmmmm that sounds like society today!)

Paul brought the gospel to Corinth and a church was established. After settling in Ephesus for 3 years, he heard word of the church’s problems and he sent a letter to the church addressing problems such as sexual immorality, division in the church and social snobbery. This extended letter (also known as 1 corinthians) addresses the root of the problem: arrogance. He says that living in this way was incompatible with God’s free gifts to them in Christ. The gifts including: wisdom, righteousness, sanctification, and redemption. A self centered lifestyle  as the expense of the under privileged was simply not going to cut it. It was clear that their personal social advancement was more important than the gospel’s advancement.

The second letter to the Corinthians (the book of 2 Corinthians in the bible) focused on the relationship between the suffering and the power of the spirit in Paul’s life/ministry/message. This letter is a response to a complicated history between Paul and the Corinithian church. Paul sent Timothy to Corinth and found the church, again, in turmoil. Paul then went to Corinth himself to resolve some issues, but found a small minority of the church to be very rebellious towards him. He left and extended mercy to them. He writes to strengthen the majority of the church that are faithful and to offer the small percentage of rebels a chance to repent. He covers topics about encouragement, discipline and joy over the repentance of the Corinthians.

Ladies, grab a glass of wine tonight because YOU DESERVE IT. Not that you need a reason to treat yo’self, of course. I’m having a glass tonight for self care, for relaxation and to enjoy the complexity of something so simple. I’ll admit I’m writing this before Wednesday. I’m sipping on a Trader Joes wine called Purple Moon Merlot. I’ve always had a love of full moons and their beauty so that’s the real reason I was drawn to this one (I can’t help but love the designs). Coming in well under $10 it was worth the investment, plus I loved it! ⭐️⭐️⭐️⭐️⭐️

As I sip I read my combined Women & Word section posted below. This poem is so simple and yet impactful. Each of you, though pretty, are born with so much to be proud of. You were born on this earth for a specific purpose only YOU can fulfill. Don’t forget that and don’t forget to keep striving for your greatness. Remind a friend today of all they are worth and that they are important. 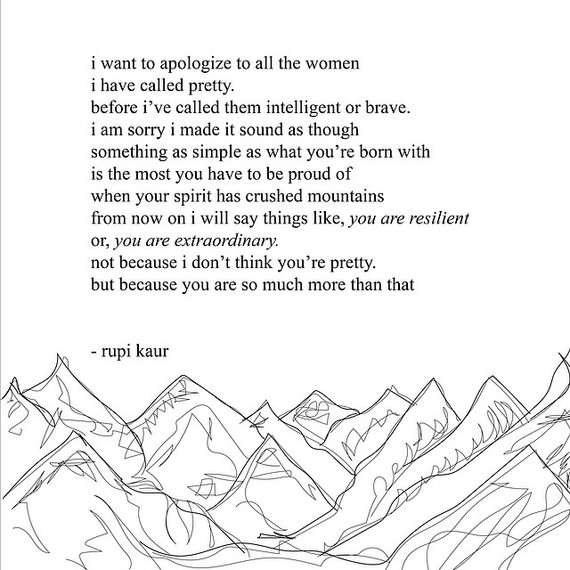 Couldn’t help myself…this is a busy week after all! I have the will, so where is my Rosé?

With a woman so strong, so accomplished and so admired, I couldn’t help but share this quote. I don’t like that the stereotype among women is that we can be catty or mean to each other. So often I see quite the opposite- women boosting other women and standing up for each other. This is something young and old women alike need to be reminded. When you stand for another woman you stand for yourself.

Proverbs 4:25-27
25 Let your eyes look directly forward,
and your gaze be straight before you.
26 Ponder the path of your feet;
then all your ways will be sure.
27 Do not swerve to the right or to the left;
turn your foot away from evil.

I love reading psalms and I love reading proverbs. There are so poetic. Not knowing where to search today I simply searched our date 4:25…I love what it showed me. Keep your eyes forward, ponder your path and turn your foot from evil. There is so much going on right now for all of us, this couldn’t have had better timing.

I shall ponder this verse over a glass of wine!

#girlswhoadventure + @atlasobscura + 🗺 🎶 🚗 = a great way to spend a long weekend #day2
❤️💛❤️💛❤️💛 #SUPERBOWL2020 #SPORTS
This is what 4 day weekends are for. 🎨 🍎 🌎 ✏️ #disneymovies #teacherchair #teachersofinstagram #paintinf
You guys. Marshall made me a Moose Mug and how can I ever drink from anything else again.... Wine? MOOSE MUG. Water? MOOSE MUG. 🐶 🐶 ☕️ 🍷 💧 😍 #dogmom
AnD a HaPpY nEw YeAr 🥳
In 2019 We explored ✈️ We played 🤸‍♀️ We supported global education 🇳🇵 We solved mysteries 🔍 We grieved 💔 We supported women 🚺 We survived the Jonas Brothers Breakup 🎶 We reminisced 🕰 🎤 We, My favorite people, & myself, Made 2019 a success. Here’s to starting #2020 and the new #adventures ahead.